Review of The Slow March of Light by Heather B. Moore 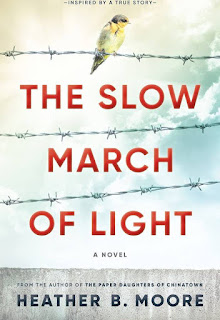 Set in the divided Germanys of the early 1960s, Heather B. Moore’s The Slow March of Light offers a fascinating look at tense and chilling events that took place along the Cold War’s ‘front lines.’ Through the perspective of Bob Inama, an actual American soldier who was caught and imprisoned while spying in the East, readers get a vicarious glimpse into the horror of life in an East German prison. Another character, the fictional Luisa Voigt, brings to life the dangers faced by regular Germans from both sides of the Wall — caring people who risked life and liberty to help their brothers and sisters escape an oppressive regime. The Slow March of Light is a story of courage, perseverance, and finding faith in seemingly hopeless situations. It’s a story that will inspire readers to search for light in their own moments of darkness.
Posted by Alexander Delacroix at 9:59 PM No comments:
Email ThisBlogThis!Share to TwitterShare to FacebookShare to Pinterest
Newer Posts Older Posts Home
Subscribe to: Posts (Atom)